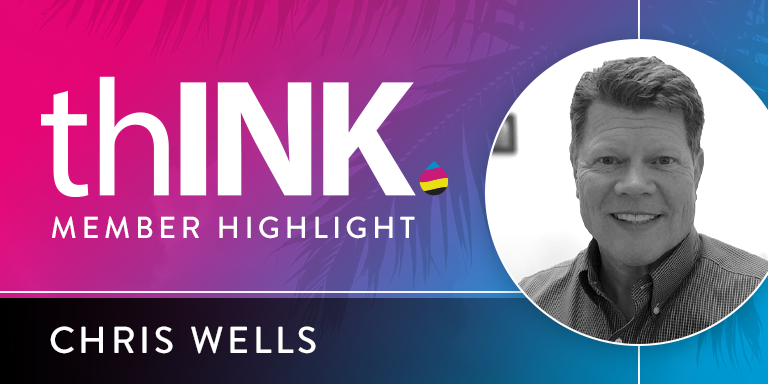 We sat down with Wells to talk about his experiences with inkjet, the print industry, and how the ProStream has helped DSG | UW better serve its clients.

DSG | UW invested in inkjet early, strategically adding over the years to its lineup of press technologies, which run the gamut from large devices to small and from offset to digital. This lineup already included a Canon ColorStream, but Wells says that the ProStream was a game-changer for the company, bringing with it the ability to handle thicker, coated stocks for direct mail, beyond just 12 pt. stock.

“The quality is off the charts,” says Wells. “It’s right on par with our offset presses.”

One recent DSG | UW project printed on the ProStream was a personalized USPS promotion series that transported the recipient through time, with each promotion set in a different decade.

“For the piece set in the 1970s, we created a 70s living room and used a QR code and web AR to put the recipient inside the lava lamp — and into a registration flow.”

That particular promotion received an impressive AR response of about 11%. “It really shows what you can do with technology and great print,” says Wells. “And because it was printed on the ProStream and we were able to use a thicker stock, it held up to post office sorting machines and made it through the mail really well.”

Throughout the pandemic-related challenges of the past year, DSG | UW has been dedicated to human-to-human interaction and meaningful outreach to their client base. When hand sanitizer was in short supply, they sent some from their own supplies to customers. “That was when hand sanitizer was liquid gold,” says Wells.

They also launched a share mail campaign to help their community combat social isolation. They sent customers postcards with prepaid postage, and 300 people sent them on to family and friends.

Even with the challenges of this year, Wells is optimistic. He’s quick to point out that ROI on B2C direct mail campaigns was up this year and theorizes that people had fewer competing pieces in their mailboxes. “We saw B2C response rates go through the roof,” he says.

The future of inkjet and printing

DSG | UW is enthusiastic about using emerging technologies like digital assistants (such as the Alexa and the Google Home) and augmented reality to integrate print campaigns with users’ digital worlds. Wells gives the example of a direct mail piece used for a fundraising campaign. “You receive this mailer and all you have to do is say, ‘Alexa, donate to my favorite charity.’ That’s the next big frontier in marketing.”

Wells says that AR offers the best of both worlds when it comes to direct mail, especially now that recipients no longer need to download an app and can simply scan with the native cameras in their mobile devices. Using technology like Blippar and RealityBLU, DSG | UW has been designing and executing omnichannel, content-rich experiences for its customers.

Wells sees an exciting shift in the role of print in marketing, noting that there has been an increased desire on the part of the consumer to be connected and to receive physical communications.

According to a recent study by USPS, 88% percent of Millennials said that they took time to look through their mail and 59% of the same population finds that information they’ve read in the mail is more useful than what they read in an email. DSG | UW sees this as an opportunity to reach out to younger generations and wow them with unique and effective direct mail campaigns.

“Everything has to be user choice,” Wells remarked. “They want to choose how to be communicated with and when.” But with the speed, quality, and personalization options of the ProStream, he sees a real opportunity to use print to earn attention.

DSG | UW’s role on the thINK Board

Francis McMahon, Executive Vice President at Canon Solutions America, and Wells have maintained a long-term friendship for close to 20 years. When Francis put together the Digital Print Advisory Council in 2014, Wells contributed his expertise and thought leadership as one of the original 10 members.

Now, Wells has joined the thINK Board, just another example of his contributions to the industry and willingness to collaborate and innovate. “I think this industry goes through major revolutions every couple of years,” he says. “We certainly are now. It’s an exciting time to be in it.”